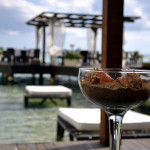 The Caribbean Islands are known for being one of the most famous destinations in the world for holidays. The sun, the beach, sun and blue sky … And although no one can deny that these are excellent reasons to visit the Caribbean, our aviation geek side is attracted to the islands for a different reason: its airports.

Where in the world can see a 747 landing above our heads, feet buried in the sand? Are there other clues which jumped almost can touch the wings of the aircraft?

The Caribbean is home to the most impressive the most difficult from a technical point of view for pilots tracks.

The northern part of Saint-Martin is an overseas community belonging to Guadalupe. As for its southern part, it is part of the Netherlands Antilles. The beauty of the island and its small mountains made their reputation. But many also are hopelessly attracted to its beach Maho Beach, next to the airport.

SXM is well known as one of the airports with one of the best approaches. The planes come to a halt near the end of the runway, forcing fly very low in the last few meters before landing.

This exceptional landing provides amazing views of the island of St. Martin passengers. As for those who are on the beach or sipping cocktails at Sunset Beach Bar and Grill, you can almost touch the wings of the aircraft!

SXM is also an important platform in the Caribbean. It connects to the major cities of America and Europe by frequent commercial flights, and connects to the most remote local islands by Winair regional aircraft.

San Bartolomé: turboprop near the grass

San Bartolome is also a very common, part of the overseas department of Guadeloupe destination. You may land at the airport of Saint Barthelemy with small turboprops, due to weather and track, which measures 650 meters long conditions.

The short flight between St. Martin and St. Barthelemy is one of the most popular routes for renting private jets, from November to April.

We hope this article has invited to visit the Caribbean, it really is one of those trips that must be done at least once in life